I’ve been playing around with this design for a couple of days. This version is pretty simple, but unlike some of the other drafts it doesn’t get in the way  (too much) of the original photograph’s story and energy.

These photos catch the mischievous ingenuity that sets it off, the pride, the joy, the coming together of community, the euphoria of a moment of freedom, the relief from heat and release from monotony. We see play, we see posing, but we also see a prohibitive and punitive architecture in the form of barbed wire, fences, and cops. Surrounded by stop signs and other orders, the streets are opened to everyone with the turn of a valve.

I was searching for this kind of image, an image to free the streets.

After Nomanzland’s chant: Free the Streets / Lock Up The Police.

After Josh MacPhee’s Free the Land.

And after Roger Hart’s piece on “containing children”.

Most people, maybe even most radicals, would look at playgrounds as fairly benign. But Roger Hart tells an interesting story about the origin of playgrounds.

The playground movement was motivated by fear, propelled by concerns with poor, migrant children playing in the streets. It was dirty and it was anarchy. So playgrounds were created and deemed an appropriate location for play.

As part of building a democratic society, Hart works today to create ways to meaningfully involve children in decision-making, including in designing their own physical environments and play spaces, in ways that make sense for them.

The playground is an adult’s narrowly construed vision of play. It is also an interesting metaphor that illustrates how the vital principle “not about us, without us” is ignored.

When I did youth organizing, the vision of youth involvement in decision-making as a hierarchical youth council, modelled as a “junior” version of adult city council, was our playground. Our vision of participation was much more broad and much more inclusive. We wanted a real voice in decision-making on issues that affected us (basically, everything) not just a seat at a kids’ dinner table. We constantly butted our heads against established ideas about what participation should look like (basically, an empty gesture).

So, with this image, I want to celebrate the spirit of freedom and direct action, especially as embodied by kids, and as played out in the streets, because really, no matter how hard they may try, how far they institutionalize and bureaucratize, the spirit of freedom can never be contained! 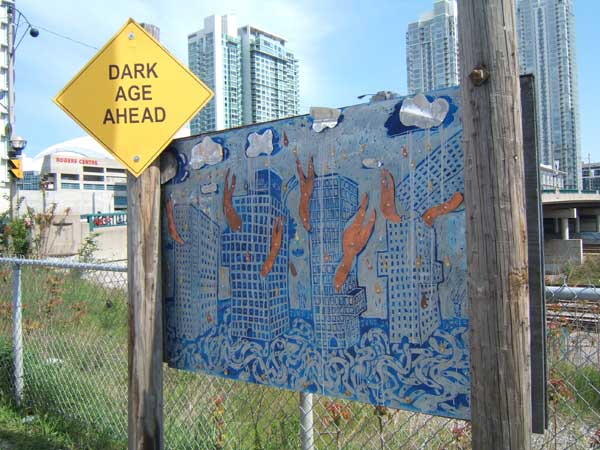