How can we design campaigns to resist attacks by neoliberal governments and strengthen grassroots movements? Inquiring minds want to know in Ontario, where we are facing four years under a hard right Conservative party led by Doug Ford.

In part one, graphics from the Ontario Coalition Against Poverty (OCAP) provided a window into militant organizing against the brutal Mike Harris government in the 1990s – in which Doug Ford’s father served as an MPP. The visual elements of OCAP’s campaigns helped advance their broader political goals, including by connecting with directly-affected people on an emotional level, channeling public anger into mass mobilizations, linking public enemies to larger power structures, putting forward new narratives, and affirming our collective power.

Here in part two, I reflect on my own experiences of cultural production with social movements, and our attempts to strike a balance between opposing and proposing. We’ll look at campaigns by No One Is Illegal (NOII), Free Grassy, and Unite Against Austerity (UAA).

On July 24, 2010, NOII organized a national day of action against Jason Kenney. Kenney served as the Minister of Citizenship, Immigration and Multiculturalism from 2008-13 in the neoconservative Harper government. In their callout, NOII addressed Kenney as the Minister of Censorship and Deportation, a title that was more befitting of his actual responsibilities.

Kenney was the public face of infuriating policy changes, and unlike most ministers in Harper’s cabinet, he was perceived as having a considerable degree of autonomy. Kenney was the architect of the Conservative’s ethnic community outreach strategy and was rumoured to be a future candidate for prime minister.

For these reasons, NOII vehemently opposed Kenney from the beginning, however this action was somewhat different. A papier-mâché bust of Kenney was created for the activities in Toronto, which took a street theatre approach to public engagement. “Kenney” and his crew of handlers visited the newcomer neighbourhood of St. Jamestown, the Yonge/Dundas shopping district, and rode the subway to a street festival on Bloor Street. Our Kenney’s itenary culminated with a football match and picnic in Dufferin Grove Park, an important site of migrant justice organizing.

With this creative action, NOII expanded its repertoire. Rallies and marches – while absolutely critical – can sometimes have the opposite of their intended effect on members of the public. Some find large gatherings of unknown people intimidating or dismiss them as unrelatable due to stereotypes of “angry protestors”. The papier-mâché Kenney and his mock entourage is a kind of spectacle that is potentially more inviting to passers-by.

I offer this example not as an alternative, but as another option to include in our own outreach strategies as we explore new ways of connecting with people. While advertised as a day against a hated politician, it was enacted in a joyful spirit of community-building. Similarly, while deeply opposed to Kenney, NOII – by virtue of its name and as evidenced by its organizing – offers an anti-capitalist and anti-colonial vision of migrant justice, which goes far beyond typical interventions in the sphere of mainstream political discussions.

What was the impact of this action – and concerted organizing – against Kenney? I believe that NOII and other social movements successfully intervened in political debates, cutting through Kenney’s spin doctoring of regressive policies. Kenney’s image – and by extension his party’s – were re-branded through this process, disrupting their strategy of courting immigrant communities. While he left the federal scene for provincial politics in Alberta*, Kenney’s tarnished reputation will follow him everywhere he goes.

*The Harper Conservatives lost the 2015 federal election to Justin Trudeau’s Liberals. Kenney retained his seat, however he resigned in late 2016 to pursue a new role as leader of the provincial Conservative party in Alberta, with hopes of unseating the social democratic NDP government in 2019. Under more opportune circumstances, he may engineer a return to federal politics.

In the fall of 2013, 4×6 foot posters appeared around Queen’s Park, the site of the provincial legislature, with a stark image of a lone tree surrounded by a clearcut forest. The minimal text on the poster posed a single question: Will Wynne force clearcuts on Grassy Narrows?

The provincial Liberal government of Kathleen Wynne required a different kind of opposition. Unlike Harris, Wynne and her predecessor Dalton McGuinty opted for a softer brand of neoliberalism with a human face. Both condemned Harris’ Common Sense Revolution, but over the course of 15 years of Liberal rule, neither leader fully restored the funding or policies he gutted.

The summer before, when Wynne was Minister of Aboriginal Affairs, she promised to do something about the tragedy of mercury contamination in Grassy and make amends for 50 years of government inaction. Before hearing back from Wynne, Grassy learned of provincial plans for clearcut logging on their territory. Scientists warned that this would only worsen the crisis.

Community members in Grassy were already activated around this issue. Since 2002, they have maintained the longest-running blockade in Canadian history to protect their territory from encroachment by logging companies. Faced with continued inaction by Wynne, a call went out for allies to show their support.

In the summer of 2013, a convergence of activist marching bands led a demonstration through Wynne’s tony uptown neighbourhood. Then the posters went up around Queen’s Park. A delegation of youth from Grassy visited the logging companies to share their demands. Freedom of information requests were filed, reports were written, and media interviews were conducted.

Community members from Grassy continued to assert their sovereignty in a wide variety of ways, as part of a comprehensive strategic campaign. In 2014, elder Steve Fobister Sr. began a hunger strike, and people from Grassy made the long journey to Toronto, forming a “wild human river” with their allies that marched to the steps of Queen’s Park under tall banners that proclaimed “Water is Sacred” and “No Mercury!”.

Grassy’s struggle is ongoing – and this is a small piece of their organizing over the past 50-plus years – but I can say this: no new logging has taken place on Grassy’s territory. Grassy has brought indigenous and non-indigenous people together through inspiring campaigns, in which cultural production plays a major role and contributes to an overall political strategy.

Six months before the highly-anticipated 2015 federal election, a public campaign was launched that made no reference to political parties or voting. It was nothing like the typical report-card-style advocacy initiative. The Unite Against Austerity (UAA) campaign by SmartChange took a more systemic approach by focusing on an underlying ideology – the logic of austerity – shared by all mainstream political parties (to different degrees).

UAA created a video, infographics, and a website to unpack the idea of austerity and name how it affects specific groups – including indigenous people, women, and migrants – and how it shapes major policies around the environment, labour rights, and war. Shifting from education to action, the campaign also highlighted local groups organizing around these issues and offered small grants to support grassroots anti-austerity initiatives.

In Toronto, during planning for the annual May Day rally, austerity was also identified as a key issue. We reached out to UAA’s designer Kevin Lo, who generously offered to share their library of visuals with us. The graphics designed by Kevin echoed the container approach of the campaign, providing a frame that invites broader participation. Kevin’s visual frames were open to being reimagined and reconfigured by local struggles and we took full advantage of this opportunity.

I created an artboard to map out our plan for communicating our key messages through visuals. Mary Tremonte and Jesse Purcell from Justseeds hosted a screen printing workshop as part of the Mayworks Festival, and over the course of the evening, participants printed over 150 placards and bandanas for the May Day march. We put forward a unified aesthetic vision for an action that can be fairly difficult to aggregate. In my reflections on May Day, I previously wrote:

May Day presents an interesting challenge and opportunity because it is a day that seeks to unite people together from across many different organizing spaces, while highlighting the intersecting ways in which particular communities, such as women and trans people, as well as Black and Indigenous people, are most impacted by austerity policies.

UAA was a visionary project. It created an opportunity for more fulsome conversations beyond the limits of electoral politics and single-issue campaigns. UAA produced well-designed public education materials, highlighted local struggles, and provided financial resources for organizing. It offered an interesting model of coalition-building and lifting up the work of grassroots movements who are leading campaigns in their communities and prefiguring alternatives to neoliberalism.

In this political climate, it comes as no surprise that so much organizing by directly-affected communities appears to intervene in what Favianna Rodriguez calls the reactive “action space”. It’s self-defense. However, whether realized or unrealized, every struggle offers space to build on opposition by proposing new ways of doing things.

The London-based Laboratory of Insurrectionary Imagination suggests that the most effective political actions “don’t just demand or block something, they put our dreams on display, they don’t just say NO, but they show how else we could live.”

Grassroots social movements also intervene in the realm of ideas, particularly if we pay attention to how organizing takes place and models new forms of social relations. The campaigns reviewed here illustrate how movements combine notions of opposing and proposing in different ways.

I started this series by writing about how I was sick of looking at Doug Ford’s face on protest graphics. I wondered about the limits of reactive campaigns. But this study made it clear to me that opposition has its strengths. I even made a little table about it:

STRENGTHS OF AN OPPOSITIONAL APPROACH

Take them down Tarnish the personal brands of politicians and political parties, mount opposition, and aim to defeat them

WEAKNESSES OF AN OPPOSITIONAL APPROACH

Shuffling the deck Politicians come and go, cabinets get shuffled, laws change. Then we have to start over again

What do we want? Can feel limiting to define ourselves based on what we are against, rather than presenting an alternative vision

I am not proposing that we stop doing oppositional campaigns. I am suggesting that we can find a better balance by doing more to integrate the transformative power of visionary organizing, especially in our current political landscape where signs, symbols, story and spectacle are ascendant. I draw inspiration for these efforts from Detroit’s Allied Media Projects (organizers of the Allied Media Conference) and the way in which their guiding principles are geared towards finding solutions to our most pressing social problems. They read in part:

Let’s carry this spirit of transformative organizing forward with us. As the fight against Ford and neoliberalism continues, in step with our struggles to build a better world, let’s remember that we have our own weapons: weapons of hope, weapons of solidarity, and weapons of unity. 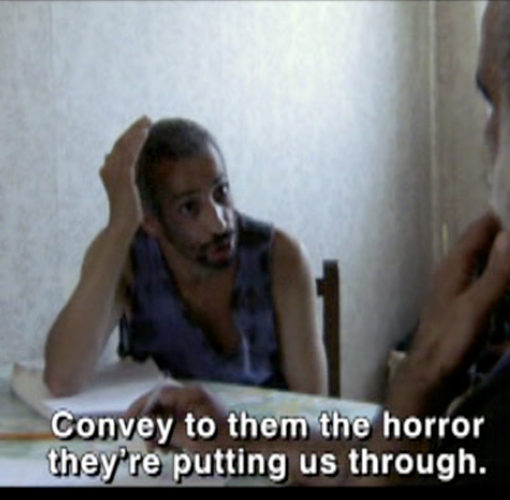 It’s unusual to come across a movie where the director encourages you to download and seed their feature length film for free, […] 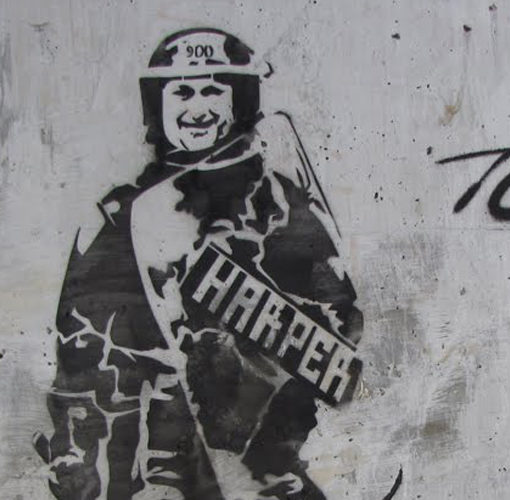